The new game 2Bit No Kick is now up at cartoondan.com/2Bit_No_Kick.html

This game is done in the 2Bit style of old Atari games. I played a lot of old, strange games on my Atari 800 growing up. Most of the truly strange stuff came on floppy discs we got from our neighbor. These games were made by ordinary people and passed along on an early version of the Internet. At this point I had no idea what the Internet was. Most people didn't.

I got the idea for this game right after I kicked my nephew. I like my nephew a lot. He's a good fellow. One day he was bugging me to do something. I tried to stay calm but he kept escalating his bugging. First it was poking, then kicking, head buts, and then full body rams. I lost my cool and gave him a little kick.

Sometimes it is hard to stay relaxed. That's where 2Bit No Kick comes in. It gives you practice staying relaxed.

The game is pretty simple. The black boxes go across the blue bars at random times and at random speeds. You need to click on the blue bar when the black box is on top of the green box. The closer it is to the center of the green box the more points you get. When you make mistakes your character gets more and more stressed out. When he gets too angry he looses his cool and kicks.

One of the best things about this game is the "Customization" tool. You can change the way the characters look and what they say. You can make the main character look like you and have the other guy look like your little sister, boss, ex-wife or whoever.

There are over 90 different hair styles to choose from

Email ThisBlogThis!Share to TwitterShare to FacebookShare to Pinterest
Labels: Games


﻿This is the new title screen for Kick Head for Facebook. The Facebook version has an upgrade system where you earn a new upgrade or move for each level you finish. It also will have a new tutorial level and a new level 1. In the new level you will go through a tournament in your dojo to see who the best fighter is in your clan. 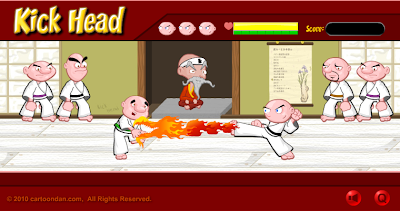 This is the new Level one. Kick Head is doing the new Fire Kick move you unlock from beating the dragon. Once you have unlocked a move you can use it the next time you play on the earlier levels. Most of the special moves require you to use some of your energy. Your energy is the green bar below the health bar. The energy bar slowly refills during the level and is fully refilled at the start of each level.

Feel free to leave your comments below.